We are pleased to announce that work has commenced on the David Urquhart Memorial Accessible Path along the shore front in Findhorn. Anderson Group began the site work on the 13th January and are scheduled to complete in 10 to 12 weeks.

The improved path will be predominantly finished in a self-binding gravel surface. Sample areas of these were prepared and ‘voted’ on by local residents and visitors to Findhorn as the path design proposals were developed with landscape architects Horner & MacLennan. Concreted areas are to be altered and extended where necessary at the numerous slipways so that existing excessive cross falls are eliminated. The working group We are delighted with the progress and all support received for the project to date, despite inevitable challenges ‘along the way’.

The Findhorn Village Conservation Company look forward to the path completion enabling a much wider range of people to enjoy the views along the Bay.

Note – During construction sections of the path will be closed to the public for construction work. We apologise for any inconvenience and ask you to respect the notices on the grounds of Health and Safety. 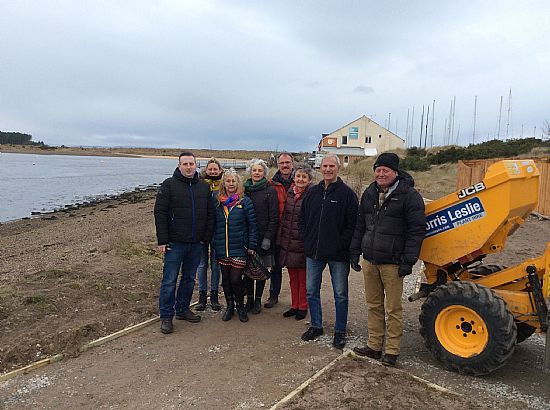 Company to manage this project.

Urquhart to raise £170,000 for the project. This has been achieved through successful applications to

funders and by the support of residents in the Village by organising various events. We are nearly

there but still need a final £15,000 to meet funding deadlines.

people who love Findhorn. People of Findhorn have settled all over the world and they have a strong

affinity with the village and many still regard it as home. We hope hope that this campaign of

amount and enable us to commence work on the path before the end of November.

Why the launch at this time?

We need the final £15,000 because some of the secured funding has a time limit and beyond that

time it lapses and can no longer be accessed. We have to ensure that the funds can be used to

construct the path as failure to raise this final amount may mean that we will not be able to go ahead with the project.

Thank you for your support in this project, we just hope it will soon ‘be on the ground’.

The crowdfunding page is -

TFVCC is a community company set up in 2011 to provide, improve and maintain environmental

The Community Action Plan has been produced using Planning for Real® methodology by and for the village of Findhorn, with the assistance of The Moray Council, Community Support Unit, numerous local individualsand organisations (www.planningforreal.org.uk).  To see the results of the consultation, please click here.

A parking fee system for cars and campervans has been introduced at the North Shore parking area.  This was included in the original business plan when TFVCC acquired the land around the village and is part of the strategy to be able to continue to run this charity with balanced incomes and outgoings.

Unfortunately, managing this land does incur necessary running costs and it is essential that we gain sufficient income to cover this. TFVCC runs with no profit. All money collected will be used entirely to cover the necessary costs of sustaining and improving the area for all to enjoy.

The system is based on the use of an honesty box, which is emptied daily.

We are pleased to be able to notify our members that we have been successful in purchasing the Armstrong Garages off Seaforth Lane, Findhorn. A small amount of work needs to be completed before we can offer them for rent to our members and then the wider village.

Details of the rental charges, the lettings policy, lease and other relevant information are now available on the "Garages" page of this site.

We would suggest that if you are interested you complete the application form and return it to us at Findhorn Village Centre. Church Place. The applications will then be passed to the Secretary of TFVCC who will, with the help of other board members, contact the successful applicants and set a date for occupation.

The majority of the funding came from the Scottish Land Fund, however although some members gave very generously TFVCC had to meet a shortfall. This has been covered by a commercial loan and we are keen to repay this as soon as possible.

We will therefore be writing to everyone in the Village to ask them for a loan repayable after 5 years tp help us maximise the potential. Once the loan and improvement works have been completed we will use the income for the garages to improve other areas of the village. See Garages page for a form.

This map is available for viewing by arrangement in the Village Centre office between 9 am and 3 pm.

We are currently working on 4 different projects involving board members, volunteers and other village groups.

Click here to see who is involved in which project.

Hazel Allen of Athena Solutions gave a presentation of the findings of the Housing and Workshop Surveys.

The majority of members were in agreement to move forward with the garage site acquisition.

THERE WAS A LAD

Proceeds in Aid of –

Bring your own Refreshments 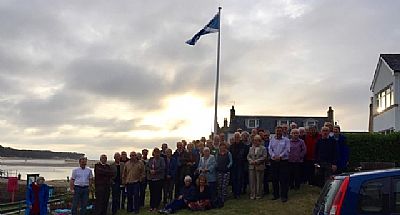 On the 3rd March 2016 the Company TFVCC took ownership of the Novar Estates residual land in Findhorn.

The Board would like to invite you to a celebratory cheese and wine evening on the 8th April 2016 in the James Milne Institute at 7.30 pm. There will an opportunity to view the maps of the land, bay and foreshore. This event is open to members, associate members and anyone who has an interest in the future of the village.

The purpose of the meeting is to highlight the achievement and to update you on the company progress and plans.

The Board of Directors would like to thank all who have supported us through this challenging process. We hope that you are pleased with the outcome. The continued success of the company is dependent on a strong membership and ongoing consultation.

Membership application forms will be available at this meeting, but can also be obtained at any time from the Company Secretary at the address below or by downloading here.

The Scottish Land Fund has announced financial assistance to The Findhorn Village Conservation Company, in Moray, to take forward its plans for community ownership of part of the Novar Estate Holdings.

Thanks to a grant of £520,000, the community are now one step closer to owning the holdings which includes 61 hectares of amenity land within the village of Findhorn, and 800 hectares of the foreshore and intertidal land adjacent to the village.

Peter Hall Chairman of The Findhorn Village Conservation Company, said: “The Company is delighted with this award. This is an exciting project for the residents of Findhorn Village. Owning and managing the land and foreshore will give community empowerment to the people of Findhorn.  This will provide opportunities to both enhance and safeguard our unique environment for the benefit of all.”

Announcing the funding Scottish Land Fund Committee Chair, John Watt, said: “I am delighted that the Scottish Land Fund is helping the people of Findhorn move closer to their goal of community ownership. Initiatives like this give local people greater control of their own futures which also benefit future generations. I wish The Findhorn Village Conservation Company every success as they go onto  secure the final funding required to make their dream a reality.”

Minister for Environment, Climate Change and Land Reform Dr McLeod, said: “I am delighted to see the latest round of Scottish Land Fund awards which will help communities in Moray to bring land into community ownership. These three communities have worked hard to identify land and develop plans for that land which will make a real difference to their long-term sustainability. I look forward to watching these projects develop and see the benefits that the Scottish Land Fund is bringing to communities throughout Scotland as the Scottish Government seeks to bring more land into community ownership by 2020.”

The First Minister recently announced the Scottish Land Fund will treble from £3 million this year to £10 million a year from 2016. This will make it easier for communities around Scotland who are interested in owning their land collectively to do so.

Further to the above announcement from the Scottish Land Fund the Board of Directors would like to thank all who have supported us through this challenging process. We hope that you are delighted with the outcome.

The Board would like to invite you to a public meeting on the 25th March 2015 in the James Milne Institute at 7.00 pm. The aim of the meeting will be to update you on progress and to celebrate this achievement. There will an opportunity to view the maps of the land and foreshore.

The continued success of the company is dependent on a strong membership and ongoing consultation. We would encourage those of you who are not members to join as this will enable you to vote on the future of the Company.
Membership application forms will be available at the meeting, on the website here, or from the Company Secretary - Marjory Barber, at the address at the bottom of this page.

We would like to thank all who have made pledges. We will provide details on how the pledges will be processed and collected later.

As the land has been valued independently by the District Valuer at £575,000, if you have not already made a pledge and would like to do so please see the relevant information under the heading Community Buyout - Urgent Appeal here.

Click here to read the article featured in the Forres Gazette in November 2013.